The Three Seas Initiative and Poland’s Impact on Europe 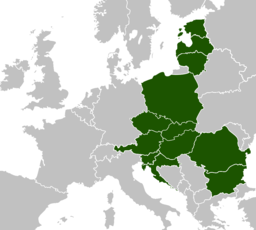 The Three Seas Initiative (3SI), a forum created in an effort to strengthen the economic ties between the Eastern and Central European nations, plays an important role European diplomacy. Founded in 2016 by twelve countries including Poland, Austria, Romania, and Hungary, the Initiative not only serves as a way of bringing Poland closer economically and politically to its neighbors, moving Poland’s economy forward, but also serves in the interest of the European Union and the United States. The 3SI has a global impact because it promotes infrastructure and energy projects, in particular ones that create energy alternatives that would compete with the monopolistic Russian gas industry. In addition to energy related projects, the 3SI also implements projects in two other sectors: transportation and digital technology.

One important transportation project proposed by the Republic of Lithuania is Rail Baltica. According to the project summaries outlined in the 2018 Three Seas Summit in Bucharest, the Rail Baltica project has three main goals for Poland and the three Baltic states: “remove transport infrastructure bottlenecks, build missing cross-border connections, and promote modal integration and interoperability.” Improving the rail infrastructure between Poland and the Baltic states would not only strengthen economic ties between the countries but also provide ample opportunity for new investment due to the improved efficiency of rail transport. As the project summary notes, “the new EU-gauge rail connection will contribute to the development of the whole North Sea-Baltic Corridor,” improving connections to Poland, Germany, Finland, and the Netherlands in particular. The project is currently in the design phase until 2022, with construction to last until 2026.

The second category promoted by the Three Seas Initiative are digital projects, with proposals ranging from creating a digital highway between the Three Seas members to creating a “SmartCity Forum” that would “accelerate investment and the rate of innovation in European cities.” One key digital project for Poland is the 3SI Marketplace, whose goal is to enhance trade and investment among the Three Seas members by hastening the scaling up process of SMEs in need of investment, enhancing capital flows, and enabling a transparent privatization process. This project is currently underway in its project implementation phase, which includes building IT architecture, cooperating with chambers of commerce across the 3SI nations, and creating promotional campaigns. The full project will be completed by 2020. By enhancing its digital infrastructure, Poland and its 3SI trade partners will be able to interact in an online marketplace on the same digital platforms as other global trade partners like the US.

Perhaps the most important and most pressing issue to the 3SI is energy. One of the reasons why the EU and the US are keen on helping the Initiative is to aid in finding an alternative to Russia’s energy supply. A third important project is the diversification of gas supply sources and integration of gas infrastructure with the implementation of the Baltic Pipe project in Poland and its neighbors. The project would include the construction of an offshore pipeline between Denmark and Poland, the expansion of the Polish gas transmission system, and the construction of a cross-border interconnector between Slovakia and Poland. Diversifying the energy supply of Europe through the construction of these new pipelines with the help of Poland and its neighbors will have innumerable positive benefits to Europe as well as the US. This issue has been a source of tension among the European Union members and the United States in the past. In the second 3SI Summit in 2017, President Trump criticized Germany’s reliance on the Nord Stream 2 pipeline that would deliver gas directly from Russia. Having a Polish-based alternative pipeline would give countries like Germany the opportunity to have gas from countries other than Russia. This 600 million Euro project will begin construction on the Baltic pipeline in late 2019, while the Slovakia-Poland interconnector has already started construction.

The transportation, digital and energy projects developed by the members of the Three Seas Initiative have already had a positive impact on Europe and the forum has gained interest from other countries. European Commission President Juncker attended the 3SI Summit for the first time last year in Bucharest and plans on returning this year. Germany has expressed its intention to strengthen its ties with the 3SI members. President Donald Trump and the United States government have also expressed their support for the Initiative. The 3SI projects, once implemented, will improve European and US cooperation and bolster the economies of summit members.

Do you want to know more about this issue or explore further? Are you interested in funding PAC’s advocacy effort? Join the cause with PAC by clicking…