On June 21, 2019, the Center for Strategic and International Studies (CSIS) hosted a talk on Russia’s preparations for large-scale combat operations. The event was moderated by Jeff Mankoff, Senior Fellow for the Russia and Eurasia Program at CSIS, with guest speakers Dr. Lester Grau, Senior Analyst and Research Director for the Foreign Military Studies Office (FMSO) and Charles Bartles, Junior Analyst and Russian Linguist also at FMSO, giving the initial 30 minute presentation. Michael Kofman, Senior Research Scientist for the Russia Studies Program at CNA participated as a discussant following the presentation, highlighting key points he viewed with importance, while also participating in the Q&A session. 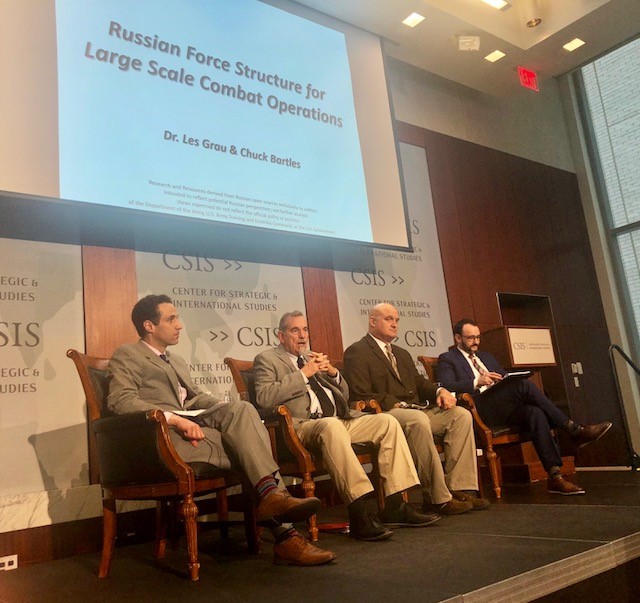 The presentation by Dr. Lester Grau and Charles Bartles focused heavily on the differences between Russia’s current military and that of the Soviet Union, with additional prediction of what a future war could look like. Two of Russia’s structural modernization strategies were specifically discussed: military district reform and brigade transition. Commanders of military districts that serve as wartime headquarters have more significant roles than in the past, while brigades have become smaller and more lethal, as well as more mobile and flexible, able to cover larger traces of Russian land. The Soviet Union once had the largest air force, but now Russia has only the fifth largest, merging its Russian Air Force and the Russian Aerospace Defence Forces for greater efficiency and logistical support. Russia’s military, in its current state, is the smallest the country has ever had, with significant downsizing in staff positions since Soviet times. With this, however, the readiness of this military is much higher than that of the Soviet Union circa the 1980s. As Michael Kofman knowingly added, Russian airborne forces are fully mechanized and capable of unloading within 24-48 hours.

What does this mean for the future of war? More specifically, what does this mean for Poland or other nations of the North Atlantic Treaty Organization (NATO) with proximity to Russia? To start, the speakers emphasized that a future war would not be a repeat of World War II. There would not be a large continuum of forces pushing forward. On the contrary, militarized internal security systems would pursue rear security missions while combat troops would serve at the forefront. Future wars would not be about length but rather who can perform best at the operational level compared to their opponent. The speakers did not comment on how smaller nations are interpreting operations being pursued by Russia. It must be said, however, that the current increase and modernization in defense strategies being pursued by Poland is certainly necessary if large scale combat operations of this degree are ever to be pursued by the giant to their East.